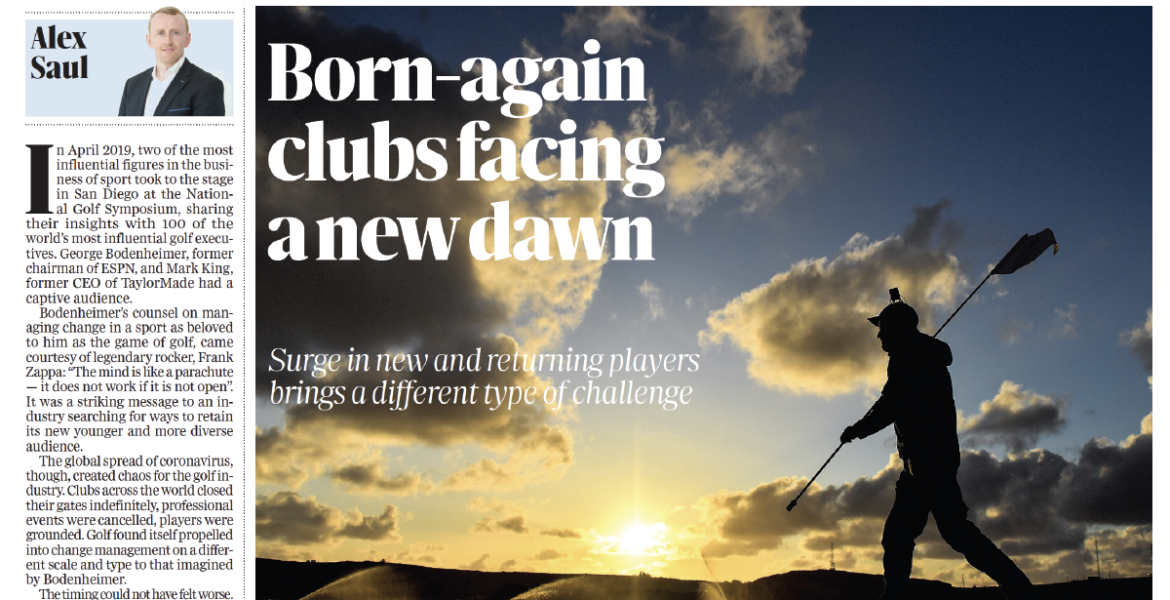 Comments Off on Born-again clubs facing a new dawn

In April 2019, two of the most influential figures in the business of sport took to the stage in San Diego at the National Golf Symposium, sharing their insights with 100 of the world’s most influential golf executives. George Bodenheimer, former chairman of ESPN, and Mark King, former CEO of TaylorMade had a captive audience.

Bodenheimer’s counsel on managing change in a sport as beloved to him as the game of golf, came courtesy of legendary rocker, Frank Zappa: “The mind is like a parachute — it does not work if it is not open”. It was a striking message to an industry searching for ways to retain its new younger and more diverse audience.

The global spread of coronavirus, though, created chaos for the golf industry. Clubs across the world closed their gates indefinitely, professional events were cancelled, players were grounded. Golf found itself propelled into change management on a different scale and type to that imagined by Bodenheimer.

The timing could not have felt worse. Golfers had plenty to be thankful for over the previous year. Tiger roared back, winning his fifth Masters in jaw-dropping scenes. But even that failed to match the buzz in Ireland as Shane Lowry claimed the Open at Portrush. His likeable persona coupled with Ireland’s first staging of the tournament in 60 years combined to create an occasion of such joy and pride as to wrap its arms around the entire nation.

Lowry was accessible and his victory injected an enthusiasm and energy beyond the game and into the general public in a year that the men’s and women’s golfing unions of Ireland finally voted to transition to a single governing body, Golf Ireland, with a cohesive mission of securing and developing the future of the game for all across the island. Throw in the announcement that Adare Manor would host the Ryder Cup in 2026 and it felt like the sporting gods had dusted down their clubs.

There were other reasons to be positive. Membership numbers domestically were stabilising at 185,000, playing volumes were up, inbound golf tourism was as buoyant and lucrative to golfing communities as ever, with an estimated economic impact of €270m a year.

So when the advice was issued to close all golf facilities on March 24, 2020, it came as a hammer blow to a game and industry only getting back on its feet after a decade long fight back from the 2008 financial crash. Managers and committees feared the worst for their staff, their members and their facilities as national health and economic concerns manifested.

Within days of the first re-opening on May 18, fears quickly turned to hope as a unique set of pandemic-related circumstances gave rise to a nationwide surge in demand and participation. Fine weather, a lack of recreational alternatives, remote and flexible working all combined to facilitate new entrants and ‘returners’ to the game.

The picture was the same across the globe and the figures were staggering. In the US, golf’s biggest market, over 75 million more rounds were played in the second half of 2020 compared to the same stretch in 2019. Even with the loss of 20 million spring rounds, total rounds in 2020 increased 14.6 per cent to 502 million. The picture was similar in the UK where the number of rounds played increased by 12 per cent, despite enforced closures for some or all of April, May, November and December.

There is no consolidated data in Ireland, but the anecdotal evidence suggests a similar bounce. Golf Ireland estimated that total membership numbers increased by 10 per cent to just below 200,000, while golf clubs across the country reported huge growth in rounds played. Carr Golf’s portfolio of managed venues saw a year end increase of 15 per cent despite the courses being closed for 94 days and return to play protocols restricting supply for many more.

Yet while the business model of many golf clubs was challenged significantly, new playing patterns emerged and booking systems crashed under the weight of the demand.

The surge wasn’t just experienced on the fairways. TV ratings soared for Tour events. Even the European Tour’s re-engineered six tournament ‘UK Swing’ achieved figures 64 per cent higher than the Tour’s 2019 average despite middling venues, low prize money and weaker playing fields. Sales of golf apparel in the larger multiples soared. In the US, spending on golf equipment exceeded $2.8bn. It’s easy in a one-horse race.

By early summer it was clear everyone was not benefiting from the boom. Clubs dependent on well-heeled international visitors to subsidise membership were left exposed by travel restrictions. Any of Ballybunion, Portmarnock, Royal County Down, Royal Portrush would welcome between 7,000 and 10,000 international visitors a year at prices from €240 to €275 a head, not to mention associated clubhouse sales in food, beverages and clothing.

There were reports of frustration with members unable to enjoy the unfettered course access of previous years. Club staff and volunteers, many of whom were dealing with their own Covid struggles, felt huge pressure operating during this period, while greens staff were forced to adapt their maintenance of courses now jammed with golfers from sunrise to sunset.

Which begs the question: How to shape the disruption, and unexpected boom, into something more sustainable?

On the one hand, Covid-19 exposed flaws in the business models of clubs across the country and pushed operating systems to the extreme. Commercial models overly reliant on any single revenue stream or segment could not provide the type of resilient cash-flows clubs and their lenders required going forward. This is a fixable problem that can be dealt with by the credible know-how that exists in clubhouses across the country.

On the other hand, the pandemic brought a new wave of participants into the game. But golf’s record when it comes to the retention of newcomers is not good. The younger and more diverse players who joined in 2020 will be more demanding in return for their loyalty. Even more so when normal service resumes post-Covid and they are reacquainted with recreation, travel, and entertainment options.

Many who leave the game cite lack of time or money as the primary reasons, but given most take both their time and money elsewhere the answer surely lies deeper. The issue is nuanced, and the solutions are varied but addressing accessibility, speed/time, gratification and belonging will start us on the right path.

When it comes to accessibility, operators in the US have long since come to understand they must offer more variations of golf, and a proliferation of par-three courses, shorter six-, nine- and 12-hole facilities or large-scale putting complexes are giving the consumer greater choice to increase retention. The arrival of Top Golf, Drive Shack and Big Shots ‘eatertainment’ facilities have enhanced golf’s eco-system.

Delivering a quality experience is more than just a well-maintained golf course with good counter service, the younger generation need more, or they will experiment elsewhere. Clubs need to think about how these newcomers experience and enjoy the game itself. If I never hit a good shot, or break 120 why would I come back? Runners and gym-goers repeatedly reference the post work-out ‘high’, that is why they keep going back and golf is no different. In organising competitions or events for members, real consideration needs to be given to how to create wins for newcomers.

Delivering on these needs in both a financial and environmentally sustainable manner will be key. Consumer sentiment and focus on sustainability is consistent across the Irish marketplace. Golf is not immune, and clubs should consider their operating and maintenance regimes through a sustainable and ethical lens. It is a trend that is here to stay and will play an increasingly influential role in how newcomers select their clubs.

There is no simple answer, but golf has been catapulted into unfamiliar air space. To avoid a crash landing, we must open the parachute.