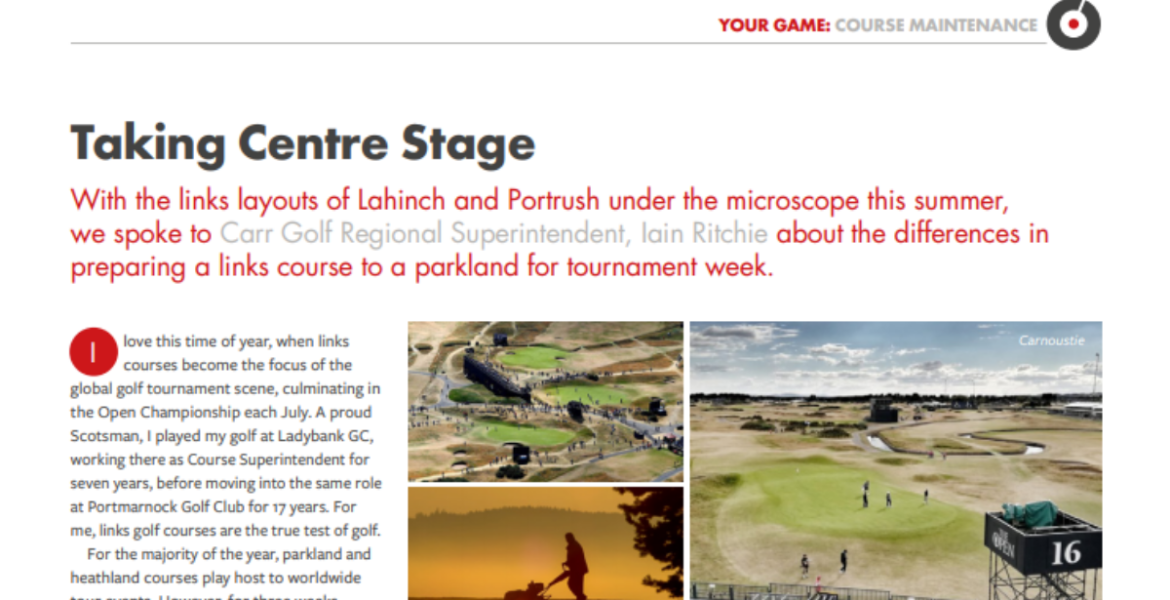 Comments Off on Parkland Vs. Links: Tournament Preparation

I love this time of year, when Links courses become the focus of the global golf tournament scene, culminating in the Open Championship each July. A proud Scotsman, I played my golf at Ladybank GC, working there as a Course Superintendent for seven years, before moving into the same role at Portmarnock Golf Club for 17 years. For me, Links golf courses are the true test of golf.

For the majority of the year, parkland and heathland courses play host to worldwide tour events. However, for three weeks each summer, Links golf takes centre stage. No more so than July 2019 in Ireland, with Lahinch hosting the Irish Open and Royal Portrush Golf Club hosting the Open Championship, 68 years since it was last played on the island of Ireland.

While Links and parkland courses can be polar opposites in appearance, what is less obvious to the casual observer is how their maintenance programmes differ, particularly pre and mid tournament. Having been fortunate to lead tournament preparations on Links courses for Irish Opens and a Walker Cup, I have outlined the main differences in approach.

Links courses appear more natural and rugged than parkland courses, and their relationship with mother nature differs too.

Traditionally, Links superintendents embrace everything mother nature throws at them. Presentation of an Open Championship course is often determined by weather conditions in the lead up to a tournament. The heatwave and drought-like conditions of 2018 saw Carnoustie playing firm and fast, with fairways brown and baked in appearance and rough light and wispy in places. You may remember similar conditions in Royal Liverpool in 2006, when Tiger Woods won the tournament hitting an iron off virtually every tee across the four days.

Contrast that to parkland courses, when the appearance and presentation of the likes of Augusta National and TPC Sawgrass is almost identical each year, regardless of weather conditions. Parkland superintendents manage soil moisture and turf colour to create lush and visually appealing courses. An arsenal of chemicals, fertilisers and irrigation techniques almost defy mother nature.

Heights of cut and mowing frequencies

It’s important to highlight the different grasses that distinguish parkland and Links courses. While the former consists primarily of poa, bent, rye and other warm season grasses such as bermuda and paspalum, Links courses are dominated by fescue.

For tournaments on parkland courses, heights of cut on greens would typically be set around 2.5mm or lower. Greens would often be double cut and rolled. Links courses are totally different, with 4.5-5mm heights of cut common during tournament week. Mother nature can even play a role here, maintenance teams must be cognisant of the impact of wind and avoid balls moving on the greens. Whilst parkland courses may target speeds of 12+ on the stimpmeter, Links courses are usually closer to 10 during tournament week.

The types of grasses and desired visual appearance combine to place very different demands on the agronomic programme for Links and parkland courses.

Parkland courses will receive higher levels of nitrogen, phosphorous, potassium and other chemicals to create lush, green, uniform and dense playing surfaces. As a result, a Course Superintendent will use a combination of granular and foliar treatments on almost all playing areas, including the rough. Parkland courses will typically be fully irrigated tee to green, including fairways to ensure surfaces remain consistent throughout.

Links Superintendents take a very different approach, with nitrogen levels 33% of those in parkland courses. The level and volume of treatments would be much lower, particularly in the immediate build-up and during tournament week. It is likely that irrigation will be limited to hand watering of greens, only to ensure playing surfaces are firm and fast during the tournament.

It is fantastic to see the Open returning to this island again; it will be an extremely busy though memorable week for Graeme Beatt and his team of up to 60 greenkeepers and volunteers. Having spent almost four years building up to it, I have no doubt it will be a resounding success.